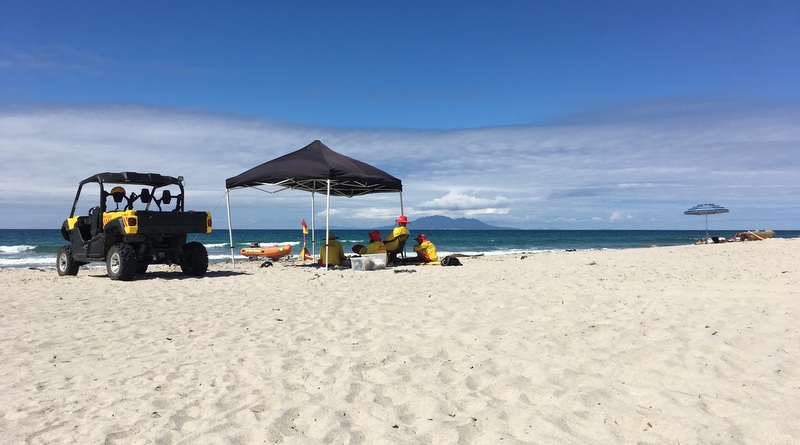 When Red Beach lifeguards restarted their volunteer patrols at Pakiri on the weekend of 22 & 23 December 2018, the club entered its tenth year of patrolling at this picturesque northern beach.
Here’s how it all began …

During the summer of 2007-08, club coach Vaughan Skiffington began training the club’s athletes at Pakiri to provide them with, at times, challenging surf conditions.

At the tail-end of the same summer, club member Chris Gurr suggested to chairman Chris Randell that Red Beach undertake surf patrols at Pakiri, an unpatrolled beach which had seen several drownings over the years. He felt that the opportunity to patrol at a second beach would not only provide club lifeguards with challenging conditions; it would also help to develop them.
In the summer that followed, and whilst still a non-active member, Chris Gurr aired his thoughts with club members, still holding a firm belief that patrolling at Pakiri would be a positive step for the club.

Before the 2009/10 season got under way, Chris was appointed to the roles of Club Captain and Lifesaving Manager. He actively promoted the idea of Red Beach lifeguards patrolling at Pakiri Beach and formulated a plan of the following two reasons:

Another factor which spurred the action was the death at Pakiri of a 12-year-old girl who was pulled unconscious from the water in January 2009. She is believed to have  been a tourist from overseas and was with her parents when she got into difficulty.

Chris called Jacqui Brown, a landowner at Pakiri Beach, to put his patrolling proposal to her. Unable to make contact, he found her brother Ringi Brown of the Ngati Wai tribe who was also a beachfront landowner.

Simultaneously, he ran his idea past SLSNZ CEO Geoff Barry, SLSNR CEO Steve Johns and NZ Lifesaving Development Officer Nathan Hight before taking his patrolling initiative to the Red Beach Surf Committee in September 2009.  He also ran the idea past Red Beach’s patrol captains and the feedback received was very positive.
There was an ongoing dialogue with SLSNR who passed the Patrol Operations Manual (POM) for Pakiri. The club was required to give the assurance of a minimum four patrollers and that it had the back-up personnel and the equipment required for patrolling. Adding strength to the club’s proposal was having tangible support from Surf Life Saving New Zealand

The scene was therefore set for the Red Beach club to further develop its membership, to maintain enthusiasm for lifeguarding amongst current members and to provide them with a beach with challenging conditions.

Pakiri Beach, stretching for 8km on the eastern coastline, is a one hour drive north from Red Beach. Club members began patrolling on 5th December 2009 and continued with regular weekend patrols through to Sunday 15th February 2010.

From the get-go, the lifeguards at Pakiri were equipped with an IRB, a quad bike, a shelter tent with Red Beach SLSC signage and first aid equipment. They also had radio contact with SurfCom based in Auckland.

For the past nine years the venture has been a total success and testament to this is the 100 rescues which have been carried out by Red Beach lifeguards. 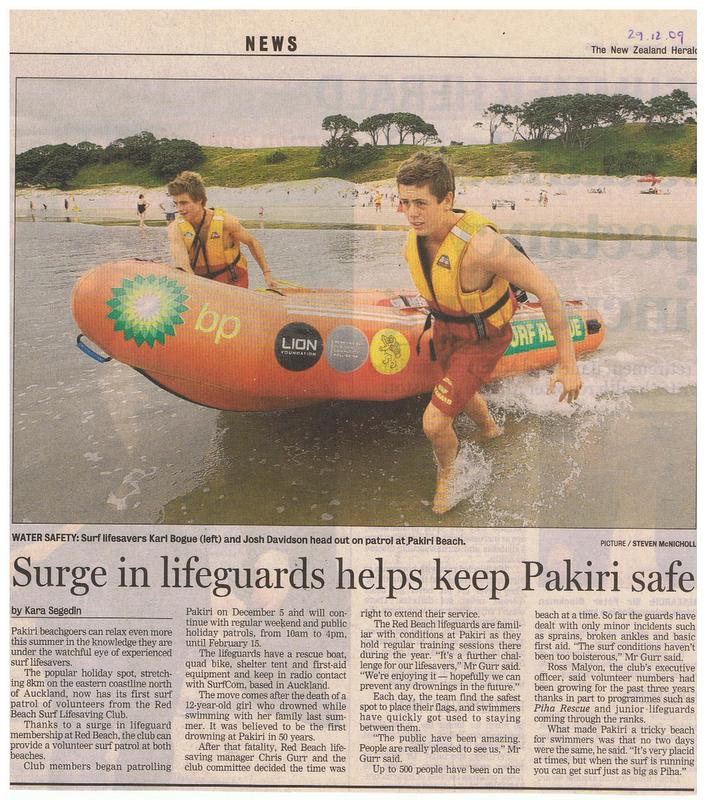