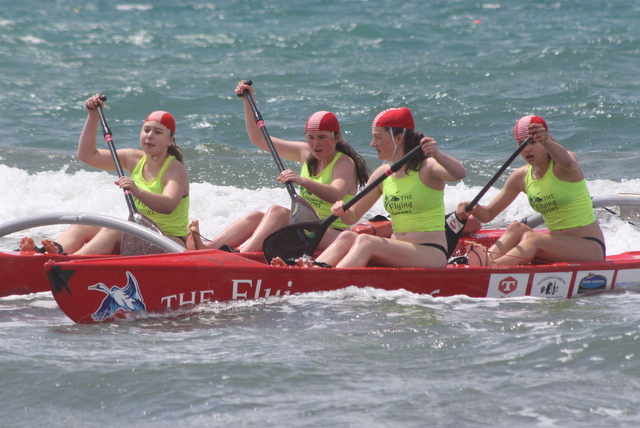 When the Owen Chapman carnival takes place on Saturday 5th January, it will be four weeks since surf athletes had the opportunity to contest the variety of surf & beach events they were offered at the Whangamata Classic.
Then there’ll be another three weeks to the ERCs at Gisborne’s Midway Beach.

The timing of the 63rd Owen Chapman Cup event at Red Beach fits well with the need of competitors, bridging the wide gap between the two-day carnivals. And with the long-term weather forecast looking good, the club’s carnival organisers have their fingers crossed.

The event has always been contested at Red Beach; it was first held in 1957 as a picnic carnival for Auckland’s east coast surf clubs. After all these years it’s evolved to become the longest running club day in Australasia for surf athletes.

The programme has a mix of individual and team events, all of which carry prizes for the winners. New to the carnival is the U16 division for male & female canoe paddlers which was contested at the Canoe Training Day held at Red Beach in October. Missing from the programme is the Candy Stripes Eliminator, however, it will make a return at the 2020 Owen Chapman carnival.

Surf ski races and relays kick off the programme which gets under way at 9.00 am. They will be followed by surf races for both men and women.
The surf boat and surf canoe series of races commence at 10.00 am. The Iron Man, Diamond Lady and Taplin relay events fill out the afternoon’s programme.

Red Beach is the defending champion, having won the Owen Chapman Cup when it was last contested in 2017. Conditions forced the cancellation of the 2018 event.