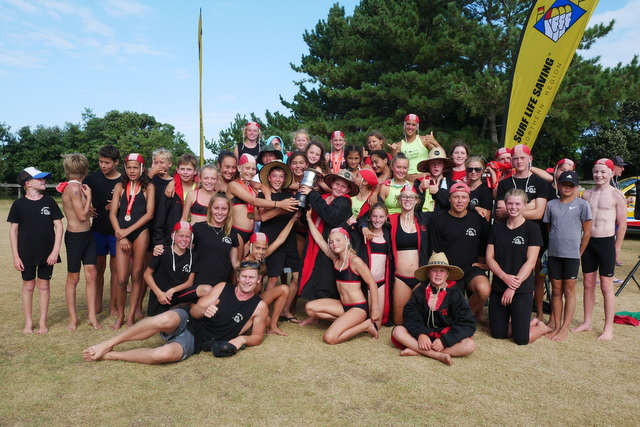 Red Beach’s young athletes claimed an illustrious double at Omaha during the weekend of the Northern Region Junior Surf Championships.
In a clean sweep they won the overall points trophy for a fourth consecutive year and regained the Cath & Eddie Millar Cup which was last won by Red Beach in 2017.
Fine weather prevailed over the two days for the 320 athletes competing although a gusty easterly on the second day of the championships whipped up some testing conditions.

Many sparkling performances were delivered by the club’s 81 athletes, highlighting the tremendous depth and talent within Junior ranks.
“It was a very good weekend for our young athletes,” said club coach Jack Gavin who was supported on the beach by JuniorSurf coaches Justin Parkes, Jade Hughes & Ella Moratti.

“The club has been placing emphasis on building the culture of the club and, as a result, everyone was supporting one another throughout the weekend,” he added.
“The kids came together as one big unit and the winning of both trophies was the cherry on the top of what we have been striving for. Our coaches, managers, parents & supporters all banded together mightily to drive the very large Red Beach contingent as one big family. It certainly feels that we are family.”

For the full set of results from the championships, click here