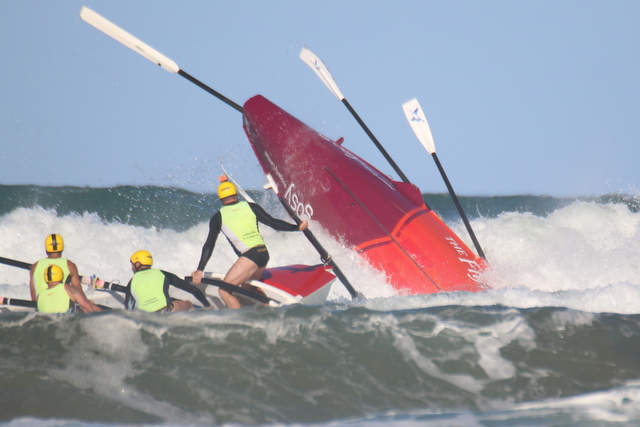 Turbulent surf at Waihi Beach during the North Island Surf Boat Championships made racing both challenging and unpredictable.
It was the fifth round of the NZ Surf Boat Series and Red Beach were represented by the Boomers (Open men) and the Rabbits (U23 Women). The Muzzies crew didn’t get to compete as they were without their fourth rower.

The uneven 1.5m surf was responsible for numerous upturned boats and the Event lifeguards were kept busy all day in their IRBs. The event attracted 63 crews, however, the surf conditions saw the withdrawal of several crews on the day.

It was a long day to be on the beach for around 400 spectators from throughout New Zealand and Australia.  Many were at Waihi to witness the Trans-Tasman Surf Boat Challenge, an annual event in which the national New Zealand and Australia teams – with four crews each – battled it out for top honours. Racing resulted in a clean sweep for the Australian crews.

Red Beach’s two crews made it to their respective finals with the Rabbits rowing home to a Bronze medal. Sadly, the Boomers’  boat overturned on the journey back to the beach and they were unplaced.

Bigger surf at Waihi on the Sunday forced the cancellation of the NZ Representative Surf Boat Challenge in which the Boomers were to have represented the Northern Region. Also cancelled was the annual Champion of Champions event.

The sixth and final round of the NZ Surf Boat Challenge will be held at the Northern Region Championships at Omaha on 23/24 February.

Pictured above … a race-ending rollover for the Red Beach Boomers in the Open Men’s final at Waihi Beach.   Photo by Veronika Cox. 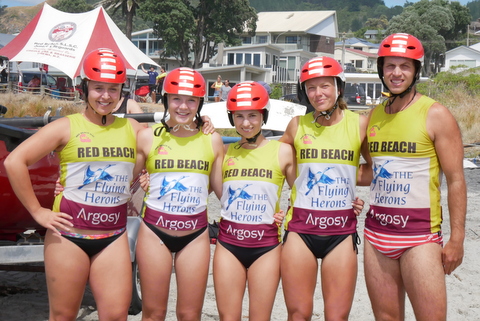 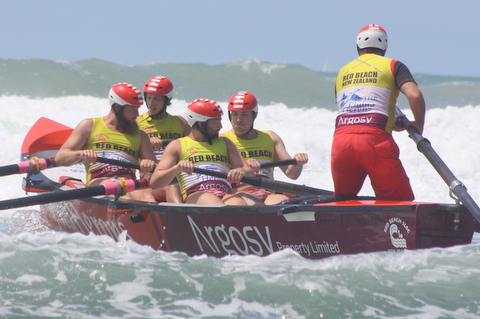 The Boomers head for the buoys in the Open Men's final.