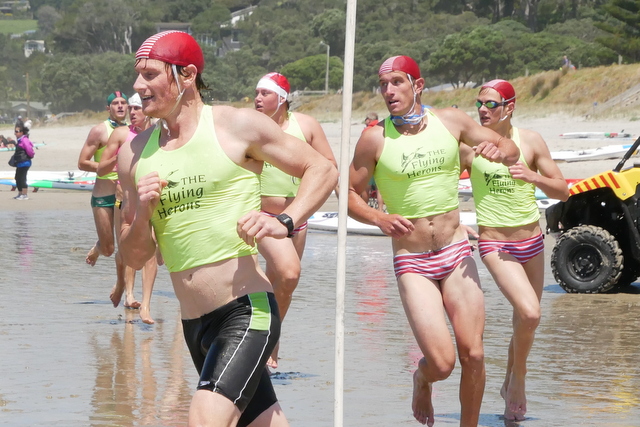 Red Beach athletes delivered some solid performances in the surf at Waipu Cove on Saturday 9 November.
It was the first SLSNR Interclub carnival of the summer and it ran from 9.00 am through to 2.30 pm.
With a surf of just over a half-metre, an on-shore wind whipped up some choppy conditions and rain threatened at times. However, by early afternoon, the sun made an appearance which made conditions more pleasant on the beach.
The programme centred on short-course racing for the board, ski, surf and Ironman/Diamond races.

“It was a good hit-out for our athletes and they did well, even though it was hard on them at this time of the year after all the longer distance training they’ve been doing over winter,” said head coach Jack Gavin.

“But it was an awesome carnival for the club culture as Northern Region mixed up the standard programming to allow the younger athletes to race alongside their older counterparts,” he added.
“The more experienced athletes were able to give the younger athletes some helpful advice on the start line.
The first-year open competitors deserve a special mention as they really stood up in their new age division, cementing all the hard work done over the winter.” 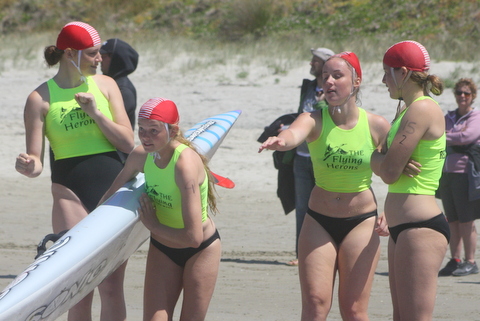 Masters competitors also took part at Waipu Cove and, for the first time at a Senior Interclub carnival, U14 athletes were eligible to compete.
Red Beach was represented in the boat arena by the newly-formed Valkyries U19 women’s boat crew along with six surf canoe crews.
Interclub carnival # 2 will be held at Omaha on Saturday 23 November.

Results:  As this was a participation carnival, there are no results to post.