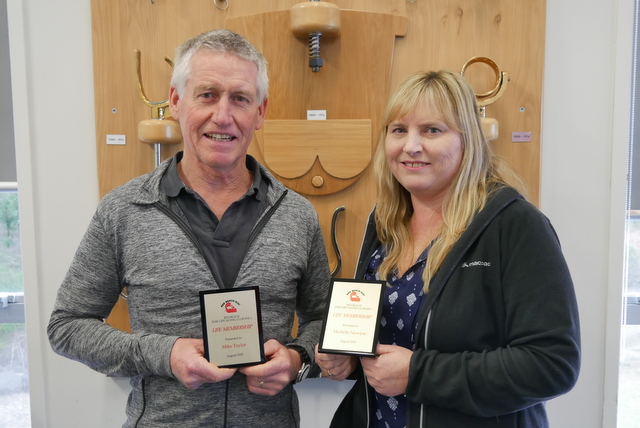 Red Beach Surf Club members Mike Taylor and Michelle Newton, pictured above, have each been awarded a Life Membership of the club, the highest honour that can be handed out.  The awards were presented at the club’s Annual General Meeting on 2nd August before an attendance of close to 50 people. Family members and close colleagues were present in the clubrooms to witness the presentations which drew standing ovations.

MICHELLE NEWTON joined Red Beach in 1987 and obtained her Surf Medallion the same year. She competed for the club for six consecutive years and was a member of the winning Ladies March Past team at the Nationals in 1990.
She obtained her Instructor’s Certificate in 1988 and was a member of the club’s Surf Committee from 1991 to 1995. As Chief Instructor, in1992/93, she put through a record 47 Surf Lifeguard awards in the one season – still a record today – and was presented with Auckland Surf’s Mainzeal Trophy for Instructor of the Year.  In total, she achieved 91 Lifeguard Awards during her 3 years as Chief Instructor.

She has also officiated at the Big Wave Classic at Piha, the Owen Chapman Cup carnival, the NZ Surf Boat Series, the SLSNR Pool Champs, the Surf League, and an untold number of IRB events. For the past eight years, she has been the Administration Manager at the NZ IRB Nationals. In 2010 she was back on the Red Beach Surf Committee for 3 years before being elected as its chairperson for a further 3 years.
She was inducted to the 21 Club in 2009. She has a Distinguished Service Award with Red Beach, SLSNR, and SLSNZ. A treble!


MIKE TAYLOR became associated with Red Beach in 1999 when his daughter Erin joined the JuniorSurf division.
He became an active member of the club when he obtained his Surf Lifeguard Award in 2003. That same season he was Deputy Chairman of the Surf Committee as well as the club’s Fundraising Officer. He also obtained his IRB Driver’s Award.
The following season, 2004-05, he was again a member of the Surf Committee, the club’s Fundraising Officer, and the delegate to SLSNR. He also obtained his IRB Instructor’s Award.

In 2006 he became Chairman of the Surf Committee and continued as the club’s Fundraising Officer and the Northern Region delegate. He was also a key member of the Finance & Fundraising Committee which saw the introduction of the Super Six sponsors and the Family of Sponsors. This method of fundraising has really flourished and it has evolved to become the platform for the club’s current-day Platinum, Gold, Silver, Bronze, and Business House sponsors.
In 2007 he was elected as Club President, a position he held for 10 years before stepping down in 2017. He served as the club’s delegate to SLSNR for six years and was a member of the Northern Region Allocations Committee for 3 years.

For a period of 12 years he carried out surf patrols; he’s been involved in IRB training and has competed in Masters events. For seven years he was a member of the club’s Sponsorship Committee and, with the progression of the club’s redevelopment project, he played a very major role on the Building Committee.

Since 2013 he has been a member of the AMRC Trust, one of three members from Surf Northern Region. And for 4 years he was the Chairman of the Surf 10:20 Committee before stepping down as its chairman but remaining on the committee.
He holds a Distinguished Service Award with both Red Beach and Surf Life Saving Northern Region.