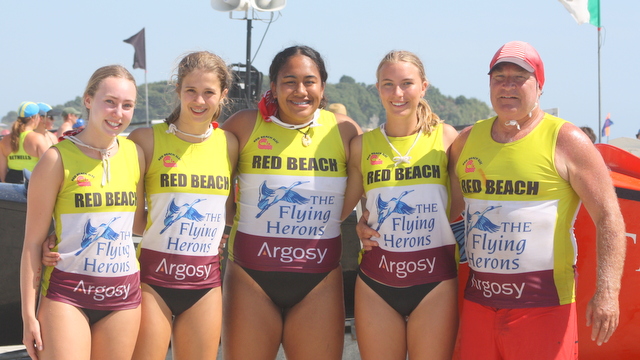 Red Beach’s surf boat rowers & canoeists were acknowledged at the club’s Prize Giving Night in July. Awards were presented to the following …

The Terry Marsh Trophy for the Top Surf Boat Crew went to the Red Beach Valkyries, the U19 women’s crew who came together at the start of the season. The crew took out the Gold medal for the 2019-20 NZ Surf Boat Series in their age division.
Pictured above, from left:  Bethany Enright, Maia Young, Lyric Logotaeao-Su’a, Keeva Marinthe, Shane O’Halloran (sweep).

The O’Halloran Family Cup for Boatie Spirit of Club Award was presented to Danielle Ford.
The Bugsy Cup for Boatie Personality of the Year went to Zoe Turner of the U23 Rabbits crew.
The Mike Smith Cup for Most Improved Female Rower was awarded to Keeva Marinthe of the Valkyries U19 crew.
The Craig Dillon Cup for Most Improved Male Rower went to Jed Wright, the sweep for the Rabbits crew.
The Valkyries crew won the Bacon & Egg Pie Bakers Tray. 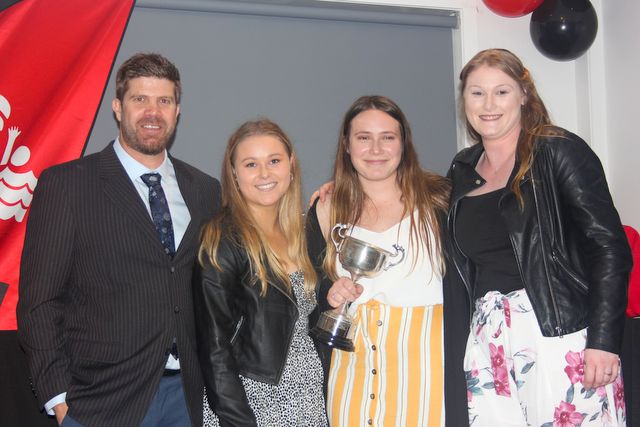 The Pukekauri Trophy for the club’s top canoe crew went to the Juicies who paddled in the Open Women’s division. The award was based on the highest number of points gained from canoe competition over the course of the season.
Pictured above, from left: Dave Young (presenter of the award), Olivia Falloon, Georgia Parker, Naomi Dyer. Absent: Hannah Corkill.