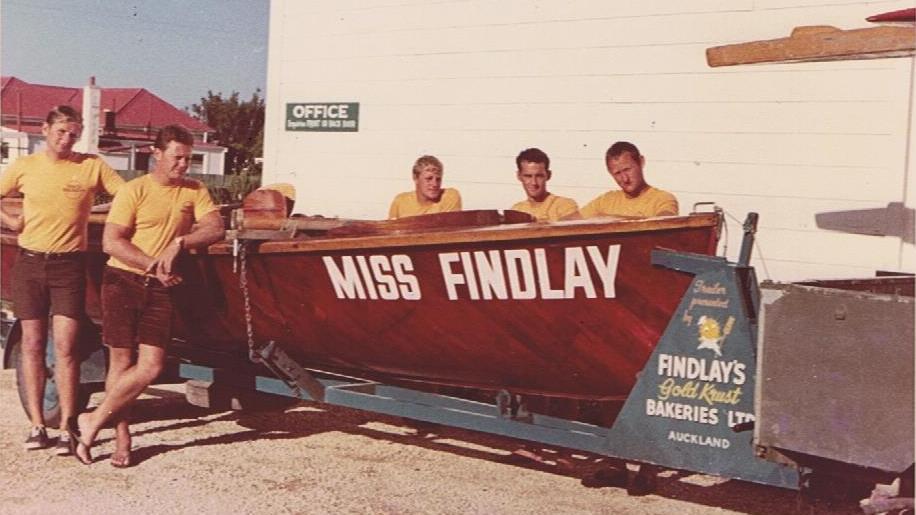 With the theme of ‘Red Beach Surf Boats through the Decades’, the Boaties Reunion at the club on Sunday 22 November will witness a gathering of rowing legends from the past 50-plus years.
Rowers and sweeps from the late-1960s and the 1970s will get to mix and mingle with the current crop of U19, U23 and Open division boaties.  And with enormous interest in the event, early indications are that it will be well-attended.

The club’s first boat to enter into competition was Miss Findlay which was purchased for $300 in late-1967 – courtesy of Red Beach club member Leaon Prouse - from the Karekare Surf Club on Auckland’s west coast. It was of Australian construction and it had been used extensively in competition and rescue work in New South Wales. Sometime later it was purchased by a Wellington surf club where it was also used for competition and rescues. It was subsequently taken over by the Karekare club, and when it came to Red Beach it was given the name Miss Findlay.

The members who formed the first crew were 'green but keen' and they put in many hours of training on the Waitemata Harbour. Funds needed to be raised to maintain the boat in top-notch condition, to carry out repairs, and to refit it extensively. It made its first appearance on the water with a Red Beach crew soon after it arrived at the club. The boat was rowed at the NZ Championships at Titahi Bay in 1968, its first national appearance.

The crew, pictured above (L-R) comprised of Ian MacKay (sweep), Paul Ranby, Jack Young, Terry Marsh & Wayne Pritchard. Miss Findlay was rowed in competition for four seasons, 1967/68 through to 1970/71. At a time during this period, Paul Von Zalinski from the Muriwai club joined Red Beach to sweep for the crew. In January 1971, at the Northern Regional surf carnival at Waihi Beach, Miss Findlay had its first notable success when it won the men's surf boat title.

Early in 1972, Miss Findlay was sold to the Waihi Surf Club as it was felt that the boat was no longer competitive. Waihi wasn’t greatly successful against stronger crews and the surf boat eventually became a fishing boat.
In October 1971, Red Beach had acquired the surf boat Miss Rothmans from the Mangawhai Heads Surf Club. It originally belonged to Muriwai Suf Club and it had an interesting history.

In December 1971, Red Beach took delivery of a brand new surf boat which, for two months, had been under construction by T K Atkinson, a Browns Bay boatbuilder. It was the start of the 1971/72 season and, for the first time, Red Beach was able to enter two boats into competition. A junior boat crew had been formed.

The new surf boat remained un-named for 11 months before a Schweppes grant enabled it to be sign written Schweppesmanship.  At a ceremony at Westhaven in November 1972, the boat was given a lemonade launch by Auckland mayor Sir Dove-Meyer Robinson.  Story to follow. 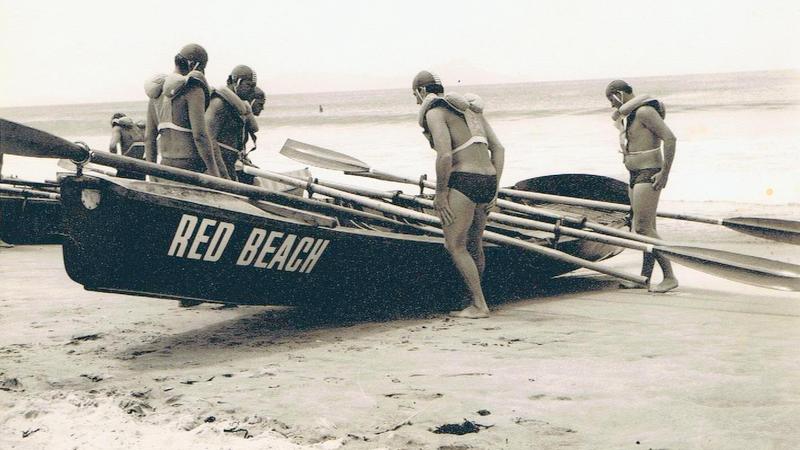 The crew of Miss Findlay awaits the start of a race at Waipu Cove in January 1968.