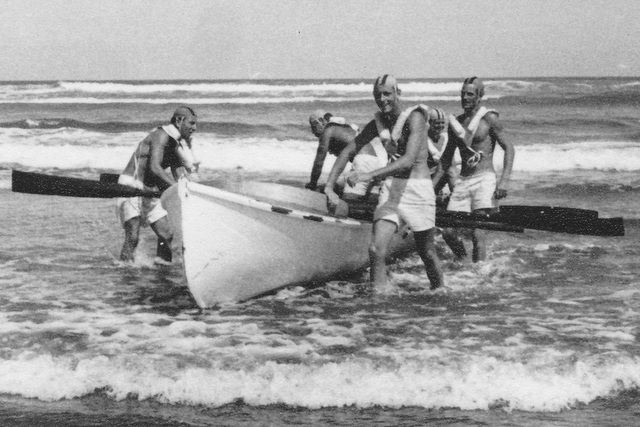 The club’s very first surf boat was gifted by the Muriwai club, however, a Red Beach crew never got to row it in competition.

It can be traced back to when Red Beach club members Peter Curley (20) and Keryn Corrigan (22) spent time at Whangamata during the Christmas holidays of 1966-67.
Purely for some fun, they rowed five or six times in a Whangamata surf club boat with some of the locals. The rowing experience triggered interest in obtaining a surf boat for Red Beach

In February/March of 1967, Red Beach was gifted a wooden boat by the Muriwai Surf Club. The boat, pictured above, shows a Muriwai crew on their home beach and was taken around 1963.
Involved in the handover was Muriwai sweep Errol ‘Red’ Lewton and the transaction came about because the west coast club was wanting to foster more surf boat competition in the Auckland region. At the time, the only clubs known to be rowing surf boats were Muriwai, Piha, Karekare, and Eastern United (Browns Bay) with their boat Jockey.

It was just the second boat to be owned by Muriwai and was painted white when it was rowed at the NZ Championships at Muriwai Beach in 1964. Prior to the boat’s handover to Red Beach in 1967 it was given a coat of red paint, however, there was no signwriting on it. It became known as the ‘red boat’.

The newly acquired red boat, although very heavy, triggered the era of surf boat rowing at Red Beach. It was rowed for fun at the beach but not used in competition. It was stored on a trailer behind the original clubrooms and was in the club’s possession during Easter 1967.
The crew for the casual rows comprised of Peter Curley and Keryn Corrigan plus anyone else who happened to be around.

Red Beach had the boat for 2-3 months before its demise in mid-1967. One day, with a decent surf running, the boat was launched by five members who were at the club and were keen to 'get out amongst it'. They were quick to see that the best waves were those coming off the reef.

The crew caught a wave and, in the process, the boat scraped the side of the reef. It became swamped and the crew bailed out and swam to shore to get out of the cold water. They didn’t attempt to retrieve it, allowing it to drift down to the far end of Red Beach in the vicinity of Whale Bay. Being submerged, it was left to the elements. The ‘red boat’ was never to be seen again.

In late-1967, Miss Findlay was purchased from the Karekare Surf Club for $300 and it became Red Beach’s first boat to be rowed in competition. The inaugural crew for the first season of rowing (1967/68) was Terry Marsh, Paul Ranby, Jack Young, Wayne Pritchard, and Ian MacKay (sweep).