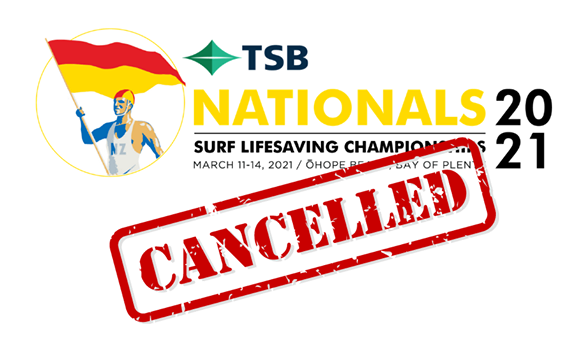 Note:  As a follow-up to the cancellation of the 2021 NZ Surf Life Saving Championships at Whakatane’s Ohope Beach because of Covid-19 restrictions, we wish to have recorded on this website the statement issued by SLSNZ prior to the event.


The full statement from SLSNZ -

It is with real regret that Surf Life Saving New Zealand has made the incredibly difficult decision to cancel the 2021 TSB Surf Lifesaving National Championships that were to be held at Ohope Beach from March 11-14.
This decision has been made now to provide 100% certainty to clubs, competitors, volunteers, and all other associated attendees and organisations.
Auckland is in COVID Alert Level 3 with the rest of the country Level 2 until at least 6.00 am Sunday, March 7. If this were to continue, TSB Nationals could not be held due to limitations on inter-regional travel (L3) and on mass gatherings of 100 or more (L2).

The advice provided to SLSNZ from the Government COVID Response Team is that an announcement of changes in COVID Alert Levels will not occur until as late as Saturday, March 6 with no indication as to what, if any, changes will be made and the duration of the potential Alert Level changes.

If that happens we would have to exclude Aucklanders from the event due to the Government guidelines that “people should take their level with them”, meaning Aucklanders could not participate in mass gatherings above 100 people in a defined space.
With over 1,500 competitors, 150+ volunteers, and any number of support personnel all intermingling, sharing equipment, food, and accommodation, SLSNZ cannot run the event whilst adhering to best practice expectations, public health requirements, and logistical considerations.

It is also important to note that while a number of clubs are based in the Auckland region, a number of members who belong to other clubs also reside in Auckland, who would also be excluded.

If Aucklanders were to be excluded, there would be significant operational capacity and capability issues that would impact the safety and effectiveness of delivering an alternative event, many of which could not be mitigated, especially at short notice. These include, but are not limited to:

There is a small possibility that Auckland could move to Alert Level 2 and then to Alert Level 1 either prior to or during the event. However, as noted earlier the timing of any Alert Level change announcement is uncertain and the experience at Oceans proved that despite all locations being in Alert Level 1, there is still a significant risk that Alert Levels will yo-yo back up again very quickly.
And if we wait until Friday/Saturday for a Government announcement and the outcome isn’t in our favour, this will result in a late cancellation (meaning a higher level of financial loss to clubs) or trying to run an alternative, scaled-down event with significant operational integrity risks.
Also, looking at the nature of the event, it enables intermingling, shared accommodation, equipment, and food and has a national distribution of attendees, some potentially vulnerable. If things go wrong and just one person associated with the event is found to be COVID-positive, the consequences of over 1,000 people and all their family and personal networks around the country having to self-isolate for 14 days and undertake testing is not something to take lightly. With the time lags between people being infected and confirmed by testing, plus then identifying locations of interest it would not be hard for the event to be a ‘super spreader’ location.
As an organisation primarily focused on the safety and wellbeing of our members and the public, we need to consider the wider public good as well as our own goals.

We acknowledge that by making an announcement now the opportunity to hold the event is being lost. However, on balance SLSNZ considers an early announcement, based on the known information today is the best approach as it provides certainty (albeit some disappointment) for clubs, and it reduces the level of financial loss (clubs are more likely to get refunds on accommodation & travel than if we cancel next week) as well as ensures we do not run an alternative event that is sub-standard and does not provide a great experience to the attendees.

Thank you for your understanding over this matter.