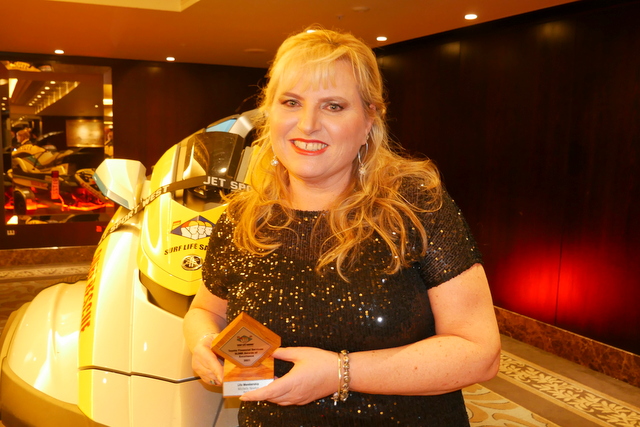 Red Beach Surf Club stalwart Michelle Newton has become just the seventh woman to be made a Life Member of Surf Life Saving Northern Region. She was presented with the prestigious award at the Awards of Excellence night at the Cordis Hotel, Grafton on 17 July before 312 guests.

Michelle joined Red Beach in 1987 and obtained her Surf Medallion the same year. She competed for the club for six consecutive years and was a member of the winning Ladies Mach Past team at the Nationals in 1990.
She obtained her Instructor's Certificate in 1988 and was on the club's Surf Committee for four years from 1991-1995. In 1992/93, as the Chief Instructor, she put through a record 47 Surf Lifeguard awards and was presented with Auckland Surf's Mainzeal Trophy for Instructor of the Year (see pic below). In total, she put through 91 Lifeguard Awards during her three years as Chief Instructor. 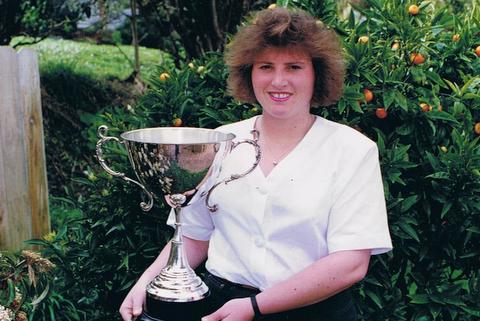 Michelle was presented with the Mainzeal Trophy for achieving 47 Surf Lifeguard Awards in the 1992-93 season, a club record which still stands.


In 1994 she joined the Auckland Surf Life Saving Board of Judges, and for 26 consecutive seasons, through to the present day, she has been an official and judge at surf carnivals.  She has been a Nationals official for the past 25 years and officiated at the World Champs in Auckland in 1998.

She has been a judge and an official at the North Island Surf Boat Champs for the past 21 years.  Michelle has also officiated at the Big Wave Classic at Piha, the Owen Chapman Cup surf carnival, the NZ Surf Boat Series, the SLSNR Pool Champs, the Surf League, and the National IRB Championships.  She was inducted into the 21 Club in 2009. 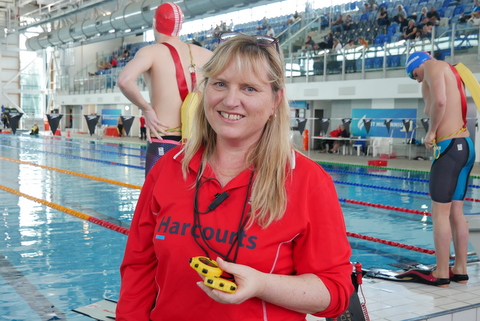 
For the past nine years, she has been the Administration Manager at the IRB Nationals.  In 2010 she was back on the Red Beach Surf Committee for three years before being elected as its Chairperson for a further three years.  In 2020 she was appointed as an NZ Surf Boat Selector for a 2-year term. She was awarded the NZ Surf Boat Series Official of the Year at Waihi in February 2021.

She is currently the Chair of the Surf Official Appointment Panel for the Northern Region. Michelle also has a Distinguished Service Award with Surf Life Saving NZ, and she was made a Life Member of Red Beach in 2020. 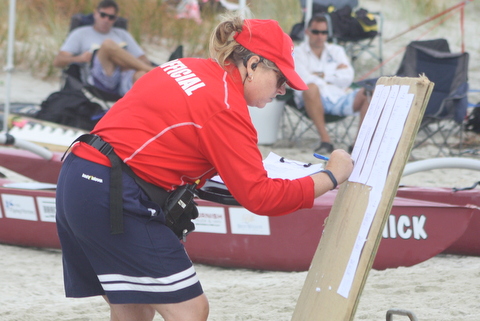 Attending to the results in the Surf Boat arena at the NRCs, Omaha in February 2019.